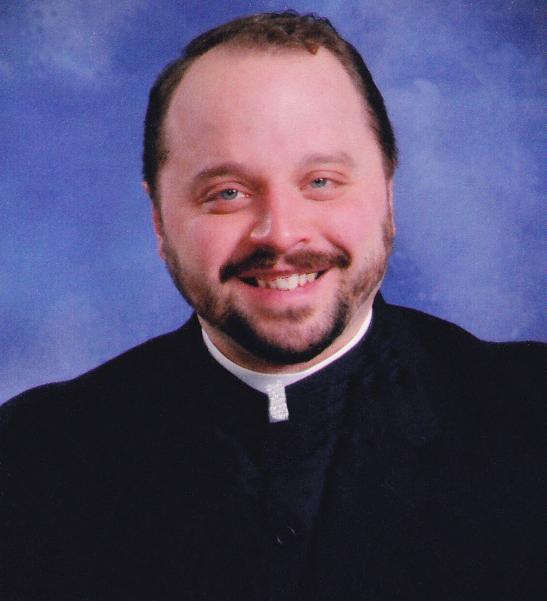 Growing up in Sanborn, NY, Jim was greatly influenced by Father Herald Nuwer who was then pastor of Immaculate Conception Church in Ransomville. From the time Jim was about ten years old until he was well into his seminary studies, Father Nuwer was the pastor at his hometown parish.

Jim was youngest of the five children born to Judy and Jim Kirkpatrick. Welcoming him into the world on July 21, 1979 were his sister Jamie and three brothers Dennis, Billy, and Greg. He attended Colonial Village Elementary School and Niagara Wheatfield Jr. and Sr. High School. He then went on to Canisius College and spent one semester as a Biology major. After that he switched to Political Science. He thought he would become a teacher or professor some day.

Jim worked the same steady job summers and school breaks from the age of seventeen until he entered the seminary. He was employed at Yankee Doodle Brochure Distributors, a local family owned business. The owner, who was also a parishioner, asked Father Nuwer if he knew of a reliable young person who would make a good employee. He recommended Jim who held that job for the next seven years distributing brochures all over Western New York.

About halfway through his junior year in college, Jim felt called to the priesthood. He had thought about it before, having discussed the idea with Father Nuwer, his mother, and grandmother. Looking back, he remembered knowing lots of great priests when he was growing up. It was appealing to Jim to serve God like they did. He spent time praying about his future, talking to friends and family, as well as Father Leon Biernat, the vocation director at the time. After graduating from Canisius College in May of 2002, he entered Christ the King Seminary in August of the same year. Although still somewhat unsure about becoming a priest, he was willing to give it a more serious look.

Jim's pastoral year was spent at St. John the Baptist Parish in Lockport. He was assigned as a deacon to St. Benedict Parish in Eggertsville. His first summer assignment as a seminarian was to St. Vincent de Paul Parish in North Evans. He had very positive experiences at all the parishes he was involved with. On ordination day, May 17, 2008, Father Jim remembers being very happy. He was just taking it all in, absorbing all that was going on, and enjoying being in the moment. Bishop Edward U. Kmiec ordained him and two of his classmates, Father Jim Fugle and Father Bob Zilliox. Father Jim Kirkpatrick was thrilled to share the day with two of his good friends.

Father Jim's first assignment as a priest was at SS. Peter and Paul in Hamburg. Serving in a large parish has given him lots of experience saying Mass, hearing confessions, baptizing, and presiding at weddings and funerals.

Father Jim enjoys the company of his fellow priests, especially his classmates, on his days off. He joins them for lunch and sometimes a movie. He also spends time with his parents, siblings, as well as four nieces and two nephews when he gets the chance. He likes to play video games, assemble and paint models, read and write short stories. He enjoys running as a way to stay in shape and alleviate stress. He follows college football, baseball, soccer, and auto racing.

To those considering the priesthood, Father Jim advises listening to God as well as trusted family and friends. He encourages everyone to develop a good prayer life, especially those considering priesthood. He feels people should always take decisions, large and small, to prayer and not just think about them analytically. If men allowed the influences of society to pull them away from what they felt called to be, no one would become a priest! For Father Jim, the priesthood has given him the opportunity to make a positive impact on society, particularly those to whom he ministers. So far it has been a wonderful life and it has given him opportunities to do things he would not have otherwise done like ministry to prisoners and the poor. He finds it a humbling experience to preside at the Liturgy of the Eucharist.

Having expressed the desire to be a teacher and a writer, Father Jim has joyfully discovered that through his priesthood he is able to be both. Being open to God's plan has led him to great happiness. Father Jim feels that it is extremely fulfilling to be a priest and that there is nothing else he would rather do.